Not welcome at Palea Epidhavros

We are parked up this afternoon on the harbour at Nafplion. There is no shade and it's currently over 32deg in the van and obviously a lot hotter outside. We planned originally to stop at Palea Epidhavros, a pretty little town 40km or so south of Corinth. As we arrived in the early afternoon we saw three motor homes parked up in the tiny harbour and we were about to make it four when an officious little fat Greek policeman arrived and told us "No camping" and waved us on before going to speak to the folk who were already there. We drove round the harbour to a parking spot at the far end but he followed us in his car and as soon as we stopped repeated "No camping". So we drove back past the other three motorhomes, two Italian and one French and saw that they all had tables, chairs, awnings out and one of them had hung some washing in a tree. Now, there are a few points here. If we free or wild camp we are discrete; we are, in effect parking and not camping. We don't take anything out of the van and we don't put the awning out and we don't draw attention to ourselves. Consequently we've never, until today, been asked or told to move on. Putting out tables, chairs etc is, in effect, camping and it's taking the p**s. And it spoils it for everyone else. Whilst I could have argued with the policeman that we were going to park and not camp it is doubtful he would have relented considering the behavior of the other motorhomers. So we lost a great little overnight spot, which has been used before and tolerated according to blogs we've read, and the town lost the money we would have spent on a drink or two and a meal this evening. When we stopped at Galaxidi a week or so ago we parked on the harbour and nearly everyone who walked past greeted us and we responded accordingly. The next morning an elderly guy came over to us, explained that he was born in the town, had commanded a flotilla and was well respected. He told us where to get water, wished us Bon Voyage and said we were welcome to park in his town anytime. I doubt he would have been so pleasant had we turned the place into a mini campsite.

So, here we are now in Nafplion which looks like a pretty town with some narrow streets and houses with balconies jutting out above. Some expensive looking yachts in the harbour and some expensive designer clothes and jewellery shops to match. When it cools down later we'll explore further and I'm sure we'll find the cheaper end of town.

We left the Blue Dolphin campsite this morning after three peaceful and restful days which we both enjoyed. It's great travelling around and we're lucky to be doing it but it's also great to have few days off from driving and the opportunity to do nothing but take a dip in the sea when it gets too hot. The only downside of the three days was the Italy/England game and I don't just mean the result. The camp WiFi had been perfect until an hour before the game when it inexplicably went down. I saw the site owner who reset it for me and then with five minutes to kick off it went again. Then it came back, then it went. On, off, on ,off aaarrrgghhh. After about 35 minutes of the match I switched to 3G. I have a 500mb allowance which is obviously eaten up streaming a football match so for the last twenty minutes I had no internet and was relying on my son back in England to keep me updated. All very frustrating. I hope things are better for the next match, hopefully I'll find a bar with a TV.

After leaving the campsite this morning we went to look at the Corinth Canal which was pretty impressive, a deep channel cut through the solid rock linking the Ionian and Aegean seas. Over 6km long, 23m wide and the vertical sides tower 90m above the water. We viewed from a bridge near the north end and then went down to the southern end to see the submersible bridge. Rather than lift the road bridge when a ship comes through, this one is dropped into the water, when there are no vehicles crossing obviously, and then raised back to road level when the ship has passed. Ingenious and very unusual.

One of the advantages of parking in a reasonable sized town is I can usually find some free WiFi. For those people interested in these things I have this bit of kit iBoost Omni-Directional System | Motorhome WiFi parked here on the dockside my iPad didn't pick up any WiFi but once connected to the system it found almost twenty WiFi locations and the town of Nafplion kindly provides free WiFi. 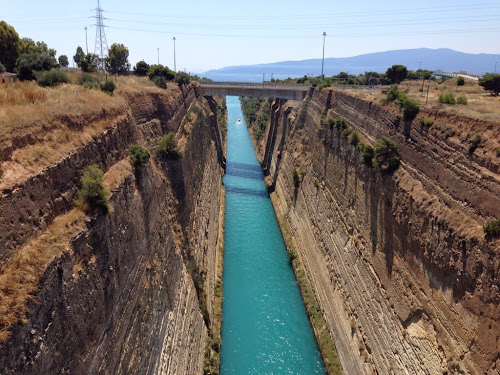 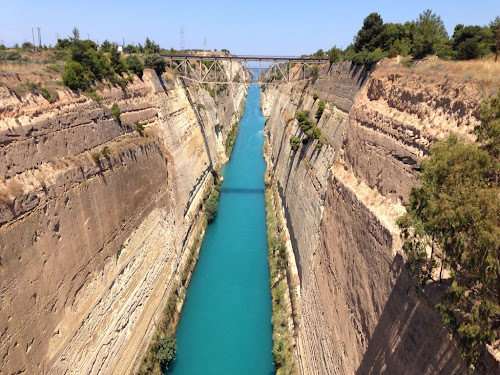 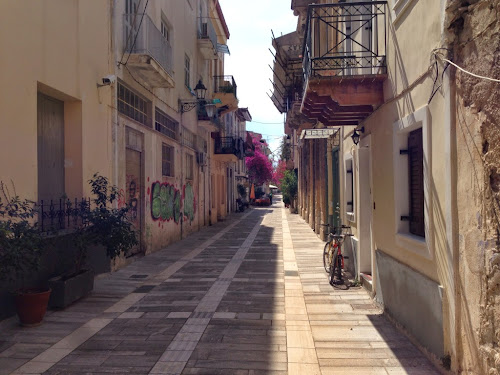 Posted with Blogsy
Posted by Pat and Phil Manning at 17:57